“A big shout out to Deontay Wilder. He came here tonight and he manned up and he really did show the heart of a champion. I hit him with a clean right that dropped him and he got back up. He is a warrior. He will be back. He will be champion again.
“But I will say, the king has returned to the top of the throne!”

The former champion is gracious in defeat:

“I’m doing good. Things like this happen. The best man won tonight, but my corner threw in the towel and I was ready to go out on my shield. I had a lot of things going on heading into this fight. It is what it is, but I make no excuses tonight. I just wish my corner would have let me go out on my shield. I’m a warrior. He had a great performance and we will be back stronger.

“Even the greatest have lost and came back, that is just part of it. You just take it for what it is. I can make no excuses tonight. I had a lot of complications. But we’ll come back stronger next time around. This is what big-time boxing is all about, the best must fight the best. I appreciate all the fans that came out and supported the show, and I hope that everyone gets home safely.”

Fury thanks Jesus and various sponsors as he addresses the crowd and then launches into a version of Don McLean’s American Pie – it’s not too shabby a vocal performance for a man who has just won the heavyweight title.

What next? Wilder has a rematch clause with Fury but he may not want to face the Briton again after the beating he just took. The obvious fight now is Anthony Joshua, but whether that happens is another question. 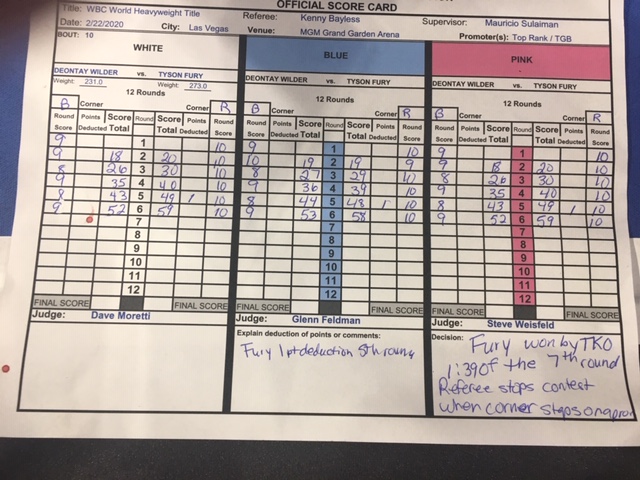 Fury was just too good for his opponent tonight. He was not only too good technically but he was too powerful too. He out-thought and outfought Wilder, and the American could not find his balance to unleash that legendary power. Fury just put in one of the great performances by a British fighter abroad.

The fight has been stopped as Wilder’s corner throws in the towel in round seven. Say it out loud: Tyson Fury is the new WBC heavyweight champion of the world!

Another dominant round from Fury, who spends about half of it leaning on Wilder in a neutral corner and in-fighting beautifully. He’s pounding away with hooks and uppercuts to the head and body. Wilder still bleeding from his left ear and in full retreat when he’s not up against the ropes.

Wilder down in round five!

Fury is landing bombs. Wilder’s legs are gone. He looks ready to fall early in the fifth. He can’t defend himself. He lunges forward with a right hand that Fury swerves easily. Wilder goes down again, a clubbing left to the body from the challenger. Fury is picking him apart and you start to wonder when the referee will intervene. Fury lands a series of blows with Wilder trapped in a corner as the bell rings. This isn’t going to last much longer. Fury has a point deducted by Bayless for hitting behind the head.

Wilder is down early in the fourth but the referee rules it a slip, which it was. Wilder is looking for the right hand to the point of parody. Fury traps him against the ropes and opens up but Wilder clinches. Fury lands a big left. Wilder is bleeding from his left ear, which suggests a busted eardrum. He looks completely off. A very one-sided round for Fury and Wilder is in grave trouble.

Wilder down in round three!

Fury lands a left followed by a left-right combo. Wilder tries to go over the top with a right hand but Fury sees it coming and easily moves out of the way. Fury doubles up the jab coming forward. The Gypsy King is starting to click here as Wilder’s output has grown more frugal. And down goes Wilder in the last minute of the third round! A right hand to the temple has dropped Wilder for the first time in the decade and the crowd is going bananas! Wilder beats the count and Fury comes in for the finish … and Wilder goes down again, only referee Kenny Bayless rules it a slip. There’s the bell. What a round!

Wilder lands a lunging right hand early in the round but Fury takes it well. Chants of U-S-A! U-S-A! ring through the arena. Fury is coming forward now and Wilder is on the back foot but it’s mostly a lot of feinting as each side probes for an opening. Another burst forward by Wilder as he tries to close the distance but Fury eludes the punches. Fury lands a right hand upstairs, drawing big cheers and Wilder clinches along the ropes. And Fury catches an off-balance Wilder flush as the bell rings, sending the champion reeling backwards into a neutral corner. Wilder looks slower and the weight gain might not be to his benefit.

And we’re off! Wilder immediately comes forward and fires a pair of left jabs. He’s circling to his left quickly and pumping the left to Fury’s head. Now Wilder attacks the body, something he didn’t do enough when they last met. Wilder already more active in the first minute than long stretches of the first meeting. Wilder springs forward with a combination but both shots miss. Now Fury, who hasn’t done much, opens up with a combo that misses the target. And Fury bursts forward again with a flurry of four punches that sends the largely pro-Fury crowd into hysterics even if none of the shots landed clearly. Wilder lands to the body but Fury lands a harder shot in return. A rip-roaring first round! Very close but I’ll give it to the Gypsy King.

Instagram= @NHLALLNEWS Covering all NHL news for over 3 years now for fun. All of the news you see on here will be retweeted from a legitimate source/insider

Trying to figure out the draft order

Could both hub cities be in the Western Conference ?!?! 😱 https://ift.tt/36M9eIp

Can you believe what the Carolina Hurricanes wanted!?!?! 😲👉🤣 https://ift.tt/3ddiCXE

Any cookies that may not be particularly necessary for the website to function and is used specifically to collect user personal data via analytics, ads, other embedded contents are termed as non-necessary cookies. It is mandatory to procure user consent prior to running these cookies on your website.